Proudly serving our Clients since 2015

Best Purging Systems Corporation is independently owned and was launched on January 1st, 2015. However, this company has roots spanning back to 1985, that stem from the EPS Division of Bebco Industries, Incorporated.

As the EPS Division founder, Mike Baucom created the first UL listed line of purging systems in 1985, and Dudley Sheffield joined his team several years later. Bebco then dominated the purging and pressurization unit market for 18 years. However, in 2003, Bebco’s founder, Mr. B.E. Baucom elected to sell the EPS Division to the Pepperl-Fuchs Corporation to fund the expansion of other Divisions.

Bebco then ceased the sale of purging and pressurization unit products, Mike continued as Bebco’s CEO, and Dudley formed D&M Instruments, Incorporated, to provide the Nation with an alternative to the Pepperl-Fuchs product line.

As time passed, many former clients contacted Mike to express their dissatisfaction with Pepperl-Fuchs, and began purchasing their purging systems from D&M Instruments.

So when Mike later purchased the ECU Division assets and founded a new company know as Bebco Environmental Controls Corporation in 2013, he decided to set things right.

He first purchased D&M Instruments from Dudley, who agree to join him in this new venture. Together, they then proudly launched the Best Purging Systems Corporation. As a result, you can now once again receive the exceptional level of service and support you deserve from a highly dedicated team with over 80 years of combined experience! 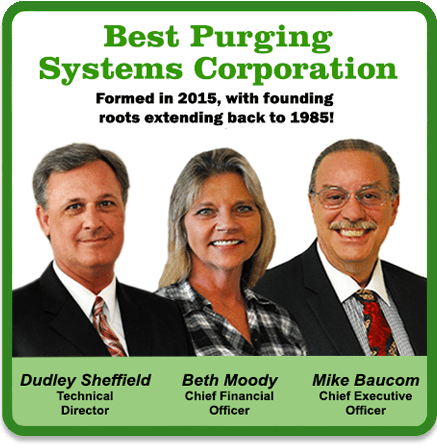 Mike, Dudley and our CFO, Ms Beth Moody, are highly energized and determined to succeed. Our entire staff is highly experienced in all aspects of hazardous location enclosure pressurization and purging technologies, with a combined experience of over eighty years. Best of all, we’re supported by a young but extremely aggressive and motivated team of empowered individuals, who’s loyalty and commitment are clearly our most vital asset.

Our corporate vision is focused on the goal of dominating the enclosure purging and pressurization unit marketplace, by once again offering the world’s finest products, backed by unparalleled service. To make this goal possible, we’ve launched the world’s best on-line shopping experience that offers the finest products in their class, along with every essential accessory you’ll require, all backed by world-class customer service.

As we now launch our corporation onto the world market and boldly position ourselves once again to be the most responsive and qualified manufacturer of enclosure purging and pressurization units, we are maintaining a clear focus, and we are more determined than ever to reestablish our history of success. Be decisive, and buy your next purging and pressurization units right now by clicking the ecom portal button above. You’ll be directed to the world’s first e-commerce website devoted exclusively to this vital market for industrial safety! Look to Best Purging Systems Corporation as an emerging new solution provider for your applications, and as a reborn and ideal example of the shining American dream in action!

Our core focus is ensuring the safe and effective application of NFPA 496 Purging and Pressurization Technology in Hazardous Locations. We prioritize safety in our manufacturing process and quality in the products and workmanship we provide to ensure that the solutions we offer will last for years to come.

However, as you’ll discover, our primary goal is to ensure your safety in the workplace, so we welcome all questions and will assist you in any way possible to stay safe, regardless you whether you have a current need for our products!

This website uses cookies to improve your experience while you navigate through the website. Out of these, the cookies that are categorized as necessary are stored on your browser as they are essential for the working of basic functionalities of the website. We also use third-party cookies that help us analyze and understand how you use this website. These cookies will be stored in your browser only with your consent. You also have the option to opt-out of these cookies. But opting out of some of these cookies may affect your browsing experience.
Necessary Always Enabled
Necessary cookies are absolutely essential for the website to function properly. This category only includes cookies that ensures basic functionalities and security features of the website. These cookies do not store any personal information.
Non-necessary
Any cookies that may not be particularly necessary for the website to function and is used specifically to collect user personal data via analytics, ads, other embedded contents are termed as non-necessary cookies. It is mandatory to procure user consent prior to running these cookies on your website.
SAVE & ACCEPT